A Catholic-Shi’a Engagement: v. 2: Faith and Reason in Theory and Practice

Edited by Anthony O’Mahony, Wulstan Peterburs and Mohammad Ali Shomali
For a number of years, a tradition of dialogue has been established between Ampleforth Abbey, the Heythrop Centre for Christianity and Interreligious Dialogue, University of London, and the Imam Khomeini Education and Research Institute, Qum, Iran. This has resulted in a number of exchange visits between the institutes and, in 2003, led to the first of these Conferences.
In 2005, the Conference at Heythrop and Ampleforth focused on Faith and Reason within the Catholic and Shi’a traditions, how this two major religious traditions and cultures resource these debates. This publication is a record of that Conference. It includes papers delivered by Catholic and Muslim experts enabling further analysis and reflection on the roles of faith and reason, authority and tradition and morality and praxis within Catholic and Shi’a thought and its influence on the daily lives of adherents.

A Catholic-Shi’a Engagement: Faith and Reason in Theory and Practice is the second volume to appear from the proceedings of the Catholic-Shi’a Dialogue initiative which is supported by the following academic and religious institutions: The Centre for Christianity and Interreligious Dialogue, based at the Jesuit Theological Faculty in Heythrop College, University of London, the Benedictine Ample forth Abbey and College, and the Imam Khomeini Education and Research Institute Qum, Iran. The Catholic-Shi’a initiative is an international group of Catholic and Shi’a scholars and religious leaders who seek to sustain and develop a dialogue and conversation between Christianity and Islam from their distinctive religious traditions. The initiative seeks to engage with the highest level of intellectual and religious discourse on matters of contemporary significance and importance for the global society whilst maintaining the theological integrity of these two respective traditions. The Third Catholic Shi’a meeting took place at Heythrop College and the Worth Benedictine Monastery in 2007. The other volumes in this series are: Catholics and Shi’a in Dialogue: Studies in Theology and Spirituality (2004) and A Catholic-Shi’a Dialogue: Ethics in Today’s Society (2008).. 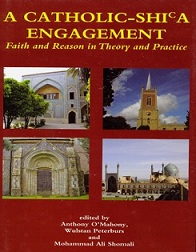